A Good Ol' Fourth of July

We stopped at Skyline for lunch on Wednesday and ran into Dick and Mary D. Ted worked with Dick at the Enquirer in the 60s and 70s. We hadn't seen them in years. Dick said he is bored in retirement but Ted said we have never had that problem.

Wednesday night was my second St. Bonnie's monthly dinner. Three more gals joined us and three of the fellows. We had quite a crowd and were a bit noisy in the beginning. I was worried about getting tossed out. Who gets thrown out of the Olive Garden??? The noise level settled down and we had a four hour dinner. We just talked and talked.

I think I understand why these dinners are so enjoyable other than the obvious. You are not someone's wife nor someone's mother. You are the adult version of a childhood friend. Little was said about where people worked, lived, how many kids or grandkids they had. Eventually I'm sure it gets to that but these intial contacts are about being friends for 9-13 years in school when we were so very young. Ted had gone shooting and picked me up at 10 o'clock.

Thursday we met my deceased cousin's husband (widower) at Pebble Creek golf course. I dropped Ted off and went on to his girlfriend's house on the 15th hole. The day was overcast and it was going to be an "iffy" golf day. Sharon and I worked on paint colors for the house as well as visited. Just as the guys got to the 15th hole where we could watch them, it started raining in earnest. They came in for a beer and after an hour or so were able to continue. Sharon and I went to Old Tyme Pottery.

When we returned we invited them to dinner at Outback Steakhouse. They have had us for dinner the last two years and the weather has been such that we didn't chance inviting anyone to the RV for dinner. We really enjoy being with them and Sharon's son. Time just passes quickly when we're together.

We went to the store in preparation for the weekend. It rained really hard so we stayed in once we got home.

Friday we left for Elk Lake. It was still raining and the outlook wasn't good. We were wondering how the weekend would go if it rained the whole time as predicted. When we arrived, Sherry and John with their three kids, dog and 3 pygmy goats were already there. The goats are being hand fed so they had to come along. The littlest one was smaller than a normal size cat. My training the week before raking manure came in handy as I took on the job of sweeping "goat pellets" from the deck and sidewalk when necessary! I'm not sure there is a future in this sort of work however. 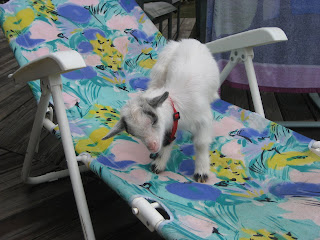 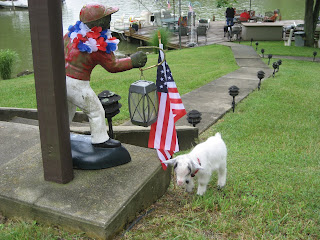 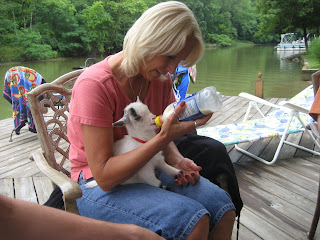 Dan, Sue and Brandon came in right behind us. Later Josh & Jessi with a dog and Nick and Vicki (two sets of siblings) came. I had brought 3 gallon bags of BBQ for dinner and we ate on the screened porch while it rained. The weather eventually cleared enough for us to go down to sit on the deck. Later, everyone found a place to sleep and we all turned in. Age has its benefits and Ted and I had the second bedroom to ourselves.

Saturday started cloudy but turned beautiful. Ted, Dan, Brandon and John went to Elk Creek to shoot sporting clays, Ron took the kids out on the pontoon. I visited with Karen and Sue, played Cootie (remember that game?) with Amada and Wyatt and swept up the pellets!! 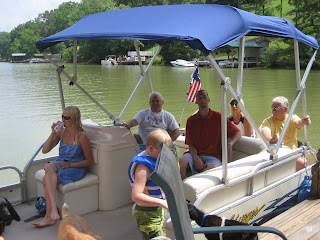 That afternoon everyone had a fishing pole in the water but not everyone was near theirs. Ted was sitting by the edge when Dan's pole beeped that there was a hit. Because Dan was over cutting bait, Ted grabbed the pole and reeled in a 5.5 lb. catfish. He finally made the "wall of fame" at the cabin! Ronnie filleted it and it is in the freezer. 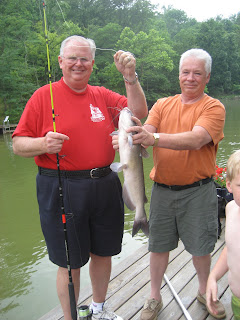 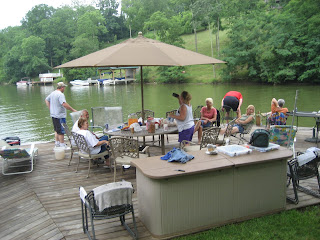 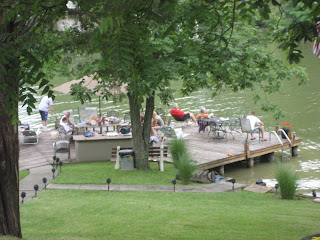 Cindy and Tim (with two more dogs) arrived in the afternoon and we had a chance to discuss the day trips on the February cruise that 10 of us are going on. We will also be meeting up with them in the panhandle of Florida in August. Those of us who didn't go on the first pontoon boat ride took one in the afternoon. Then six of us went to Mass and we came home to BBQ chicken, corn on the cob, potatoes, macaroni salad and about a dozen desserts. Some of the young adults were going to the concert at Elk Creek Winery and left after dinner. 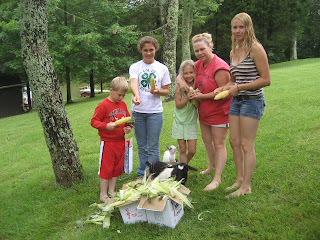 There were lots of fireworks going off and we sat on the deck and watched. Ted, Dan and Ron took the pontoon across the lake to another cabin owned by a friend of Dan's whose brother is married to Ted's sister. Such a small world. The kids all came home, ate again, then watched a DVD. Once the fellows came home, we all turned in.

This morning started with a breakfast of goetta, ham, sausage, biscuits and sausage gravy, scrambled eggs, coffee and OJ plus assorted pastries. Ron was the chef and worked hard to feed us all. Little by little, everyone gathered their things and departed. I determined that it was a two 55-gallon garbage can of soda/beer cans weekend. The cans will be sold and the money used to buy fuel for the boat. Everyone brings their own cooler, some snacks and something for the main meals. It works well. If you don't have a good time, it's your own fault.

We arrived home about one o'clock and prepared for the arrival of Judy and Joe. They were our best man and maid of honor when we married 43 years ago. They had to be somewhere else later on but we had a 3-hour visit and it was wonderful to see them. Afterwards we went to dinner and then stopped at the Argosy. I immediately won $100 but played until I was only $8 ahead. Ted was $20 ahead so we decided to leave before we played it all back.

I have more than the usual amount of pictures but the goats were so darned cute I couldn't resist.
Posted by Ted and Donna at 8:47 PM

The goats are cute! I would rather have the feeding job as opposed to the sweeping job but it all needs to get done. Who is Dannys friend that is married to Daddys sister?