Tuesday night we went out to eat with Sue and Niles.  We have spent very little time with just them. We all enjoyed our time together and talked of us stopping at their Minnesota home this summer.  We came back to a bad evening,  A camping and Words With Friends lady wrote to say her 53 year old daughter had a heart attack.  They put a stent in a 100% blocked artery and she is stable.  Then I saw some info on FB and called our friend Jay and he confirmed another camping couple had lost their 36 year old son.  He was found dead in bed and there were no results yet of the autopsy.  Then Gerre wrote and said her daughter in law was hospitalized with pneumonia and was seriously ill and on a respirator.  They called this morning to say they cannot come because she was taken to a Philadelphia hospital to be put on a machine to put oxygen into her bloodstream.  It is touch and go.  They have no children so her son could use some moral support.  I was afraid to answer the phone or open my IPad.    Please keep all these folks in your prayers.  Parents losing a child at any age is a tremendous loss to bear.

Last Saturday we went to another show after church and dinner.  On the way home we were stopped on the entrance ramp by a Mission policeman.  Tom pulled into the safety zone and the cop knocked on the back window next to me.  I couldn't get the window down because Tom had to unlock it.  When I did get it open he asked me if everything was ok.  Then he asked where we were coming from and we told him and that we were on our way home.  He ran Tom’s license and then said he made an improper lane change.  He came to a full stop at the entrance to the frontage road because two cars went by.  Then he pulled out, put his blinker on, then entered the left lane and onto the entrance ramp.  Whatever!  Everyone said they were probably looking for a red Jeep and he made up something to stop us.  That was The excitement for the night.

Sunday I did laundry and played mahjong.  Monday night we went to Mission West for their burger night.  Ted doesn’t have to ask me twice.

Tuesday after mahjong there was a Mardi Gras parade.  It normally comes down Lark Drive but they changed the route this year.  So a friendly (?) little snake showed up in the middle of the street to entertain us all.  Richard, the critter control guy, was in the parade so we had to keep an eye on where the snake went until he could come back to relocate him. 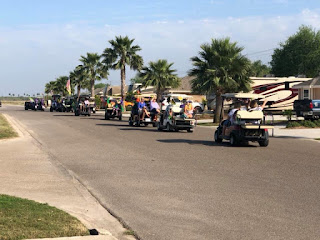 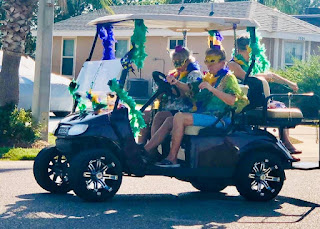 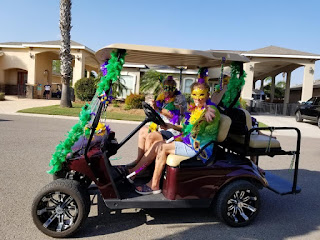 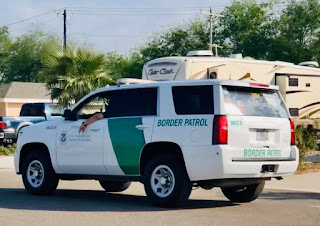 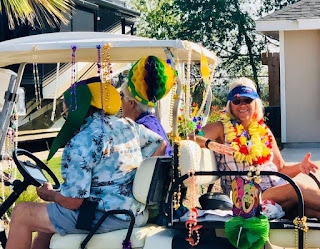 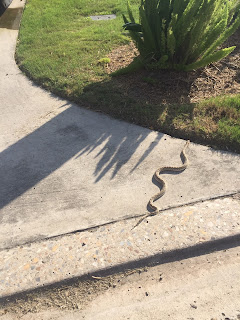 I am not sure what we did the first part of the week but I did play mahjong on Tuesday.  Wednesday was our DRV owners luncheon at Smoked Oak BBQ in Mercedes.  We had 37 in attendance and feel it was successful. The food was excellent and we were given a large room just for us.  Hopefully new people will check us out on Facebook and join the group. 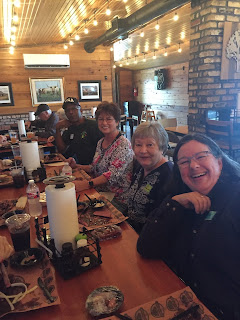 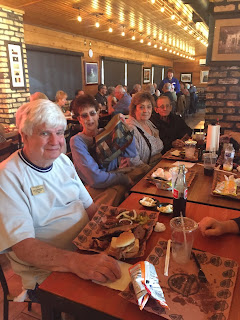 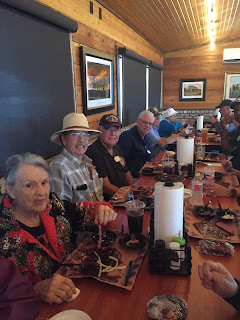 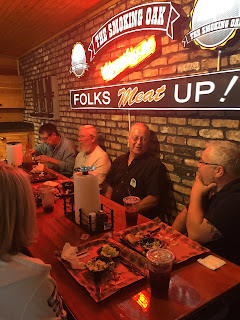 We went to Mexico afterwards  to pick up some more meds to finish up what we will need between now and the beginning of next year.

Thursday I joined the ladies for our weekly breakfast.  It is hard to be up and out by 8 but when you return at 10 dressed and fed you are set to get a lot of things done, especially errands, with such an early start.  Mahjong was Friday in our coach house since the clubhouse was being used for a fundraiser for Cinderella Pet Rescue.  I have been having a dry spell and not winning.

After church on Saturday we ate at Saltgrass with Tom and Eileen before going to Fiesta Village to see Dave and Daphne.  We knew nothing about them but boy were we fans by the time we left.  Great entertainers with big voices and so much talent.  We love the patriotism of these shows.  They start with the Pledge of Allegiance and end with singing the National Anthem, with gospel songs interspersed through their program.  There is always a salute to the Veterans in attendance.  You just come out feeling good with hope for our country.  Their music covers a range of all genres and is so fun to experience.

Sunday was another program at the clubhouse and knocked us out of playing mahjong. Maybe my ju-ju will be back when I finally get to play again and I will win!

A group of us went to Weslaco shopping on Tuesday.  I bought a dress and bathing bathing suit (both for Cancun) and an Easter outfit for Cece.  We had lunch at a NY deli restaurant before coming home.    Marissa and I had facials on Wednesday, something we do together each year.  Thursday Eileen was not feeling well but I had a very busy day.  I had 4 women to pick up for breakfast, when I got home I had a few minutes before picking up Trudy to go to Macy’s where I bought a pair of slacks, two tops and a blouse. I am done shopping!  I returned home and then left to get my nails done followed by grocery shopping.  It was dinner time before I got home.  The whole day was filled!

Friday I had another leather craft class and made a card holder.  I am not sure how well it will work, time will tell.  It was Eileen’s birthday so we took them to Mama Mia’s for dinner.  Ted picked up two Nothing Bundt Cake cupcakes that we took to the restaurant.  There was a large group of teenagers behind us attending a birthday get together.  They had a huge balloon on a stand right behind me.  I asked them if I could  borrow the balloon so we could sing to Eileen.  The table next to us joined in and then I returned the balloon.  Crazy old people!

Tomorrow is the village garage sale so we will wander around to visit more than anything.  I doubt there is anything for sale that we need.  We will go to church, out to eat and pick out a show to see afterwards.

Gerre and Barry arrive from Willis on Wednesday.  They are staying until Monday.  It will be another busy week!

Our Time Is Passing Quickly

We had a potluck before the Super Bowl and since I had bought three dozen eggs, I made half of them into deviled eggs and they all disappeared.  People seem to enjoy them.  We watched the first half of the game in the clubhouse, used half time to walk home (which I heard was a good thing to miss), and finished watching the second half at home.  I was glad Kansas City won.  I have never forgiven San Francisco for beating our Bengals back in the 1982 Super Bowl!  I can hold a grudge for a l-o-n-g time!

Monday was the ladies lunch at Buddy V’s, a very nice Italian restaurant.  The lunch special was soup or salad, a pasta and a cannoli.  I had tomato bisque soup since salads and I don’t get along, ravioli and a chocolate cannoli that I took home to Ted.  I thought the food and service were great And Ted really liked the cannoli.

I played mahjong on Tuesday, and on Wednesday, Trudy, Eileen and I went to Weslaco to visit the stores that provided the clothes for the fashion show.  Using my model’s discount I bought a pair of shoes, a Christmas gift, 3 tops, 2 capris and a baby book for Cece because she doesn’t have one yet.

I needed a day to take it easy so I skipped the weekly breakfast and just stayed close to home on Thursday except to take the baby book and DVD for Sam to the post office.  Friday we both got haircuts and I played mahjong.

We decided to go to the Don Wes flea market on Saturday.  But before that I got up early and drove to the Weight Watcher meeting and got weighed but didn’t stay.  I am back to the weight noted on 11/1 which was before Ireland, Michigan and the holidays so I again have my small cushion under goal.  I will not have to go again until we get home in March.  My 19 month record of staying within 2# under to 2# over stands!  An entertainer we enjoy was performing at the pavilion so we sat down for a bit in the sunshine.  Ted bought a mopping brush to clean the cars and RV and I bought racks to hold dominoes because I keep knocking mine over, plus two greeting cards. 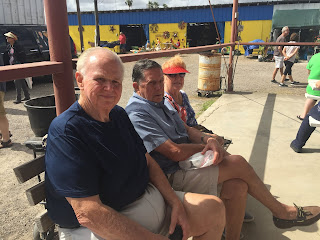 We came home for a bit and then went to Mass.  The crowd has increased since the second wave of visitors arrived 2/1.  Starting 3/1 the exodus will begin.  The further north you live, the longer you hang out down here.  Minnesota folks are the last to leave.  Canadians can only be gone for six months or lose their medical coverage so they watch the calendar closely.  We plan to get home around 3/23 or so.

We headed to our new pizza place where they hand toss a custom made pizza allowing you to choose your crust, sauce, cheese and toppings.  Then it goes in the oven called the Beast and circles around until baked.  When we got up to leave Ted addressed an older Hispanic man who had arrived with his family in tow.  When the man said yes they were his children and grandchildren Ted told him they were going to stick him with the bill.  He laughed and said they already had.  They asked where we were from and what we do while here in Mission.  After chatting he gave us his card in case we ever had a problem or needed help.  He was the mayor!  We kept the card.

Then we were off to see Jason Coleman, the piano playing grandson of Floyd Kramer, Nashville’s most famous pianist.  We met John and Vivienne, plus John’s brother and sister-in-law at Bentsen Grove along with Tom and Eileen. Jason does such a great show that we have enjoyed it three years in a row.  I will happily see him again next year God willing.

I finally went to the laundromat on Sunday.  There are large washers and dryers so I can use three for white, colors and darks, all washing at the same time.  I do the same with three dryers.  When the first stops, if I have something not completely dry, I toss it into the last one that has an extra 10 minutes on it.  The second one stops just as the folding of the first is done.  If I find something damp, it goes in the last dryer.  Anything like bath mats or jeans that still aren’t dry get taken home and laid on the table in the coach house to finish drying.  Then I am done for two weeks!

This week we have our DRV Mobile Suites luncheon at Smoking Oaks BBQ in Mercedes.  We will go to Mexico after lunch to pick up Ted’s eyedrops.  We probably won’t go back then until Gerre and Barry come down.