Not Much Going On

I really don’t have anything to report.  We have been cooking dinner still, not much else to do!  One day we took a short ride just to get out of the house.  A trip to nowhere for nothing!

On Friday Terry and Carol were to bring carry out fajitas from the country club to eat on our deck.  But it threatened rain and got a bit chilly so they asked us to come there.  I wasn’t totally comfortable but we did go.  The fajitas were good.  We all had our own individual cups of toppings and used tongs for tortillas and the meat.  Afterwards we played cards and I didn’t win!  Being quarantined has not improved my card playing skills!  The best thing was I cleaned my whole house in anticipation of  having company!

We live streamed our 5 pm Mass Saturday and cooked a turkey breast in the Instant Pot while we watched.  The turkey was done just as we finished.

Sunday we received a call from a couple coming from Arizona to look at our RV that is for sale.  We expected them on Monday and planned to set it up in a campground so they could see that everything worked, etc.  It was raining cats and dogs Sunday afternoon so once the rain stopped Ted went to the storage yard, hooked up, pulled it out, opened it all up.  They arrived at our house, followed me to the storage yard and they spent about an hour looking it over.  They are looking at several.  The lady said it was beautiful and her husband wanted a Mobile Suite so we have two things going for us.  We have no idea what  else they are looking at but they intend to take something back to Arizona.  They said they will let us know either way tomorrow.   Stay tuned!

Well there certainly isn’t much to write when you sit in your house all day!  Boring.  I went to the RV twice, once to get our gift cards we forgot to bring home and another time to take a few more photos someone in AZ asked for.  We ran into no one in the gated storage area.  Then my big outing was to get blood drawn at the hematologist followed by a stop at Walmart.  I was so busy distancing myself I was 6 feet behind Ted.  He said maybe I should just go home and stay there.  So I did.

I have been cooking most every night.  We did pizza once, McD’s fish one Friday, Chik Fil A drive thru (Ted, not me) and Raising Cane chicken.  Out of 29 days, that leaves a lot of dinners.  It isn’t so bad because I have nothing else to do.

We have used live streaming to attend church on Sundays.  Once we watched Fr. Roy down in Mission.  You don’t spend much money when you stay home, especially if you don’t go on line to shop.  I have ordered a slip for me and ink cartridges this month and that’s all.

Our trip to Cancun was cancelled.  We have 3 campground reservations starting the second week in June through the third week in July that are in place so far.  One is a state park, another a county park.  A good many government park systems are shut down for now so time will tell.

Our grandson Sam is graduating high school but everything pertaining to end of year - prom, honors convocation, graduation, party are all up in the air.  I have seen events being cancelled for the 4th of July.  He is going to Wayne State U and Kara said they have been very informative in how this will affect moving into the dorm and classes.

Our Easter was better than expected.  I was up early so live streamed the 7 Mass.  The homily was something God wanted me to hear.  Ted got up later so he watched the 9 am Mass.  I was surprised with an Easter basket, my first in many, many years.  The Easter Bunny filled it with 3 of my favorite candy - Butterfinger bunny, chocolate eggs and Peeps! 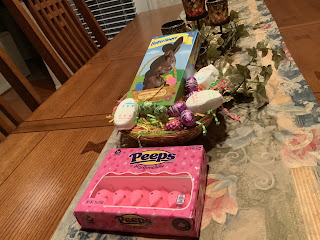 Ted bought a 9# ham so we knew going in we would have lots left.  We baked a sweet potato for Ted and a white potato for me.  I also made a pineapple carrot salad plus Hawaiian rolls and a crazy crust cherry pie. 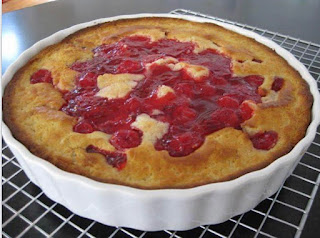 But the best part of the day was two Zoom meetings with our kids!  Kara set it up so she, Kristin and I checked it out to be sure everyone could get on.  There is supposed to be a 40 minute time limit but for some reason in Easter it was not enforced.

After everyone’s dinner we all got on Zoom again, 16 in all.  Even Grandma Duda, Kelly’s mother in law who is under going chemo for lymphoma was there and Cassie’s new boyfriend.  I really liked the last one so I was a bit bummed but I will withhold judgment.  Little Cece was crawling around and then while sitting next to her Daddy she was watching his hand go from the Dorito bag to his mouth.  She never said anything but never missed a chip!

It was 88 degrees and sunny, just a lovely day.  Being outside or having others over for dinner would have been so very nice but it was not to be.

So we have two more weeks of this.  I am holding my -2 to +2 of goal for Weight Watchers.  They closed down so I have not been weighed by them since February.  But I know how my scale is versus theirs and I am within range.

That’s about it from our house.  I guess the rest of the world is still out there.